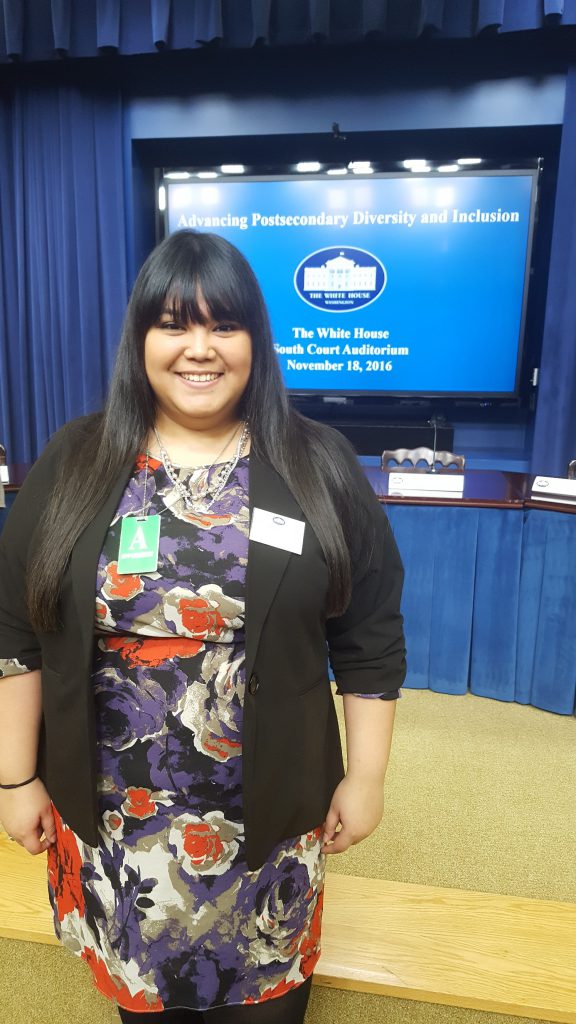 Hi everyone! My name is Sayra Alanis and I am a Cohort 6 LEDA Scholar from Los Fresnos, Texas. I graduated from Rice University in 2015, where I double majored in Spanish and Portuguese and the Study of Women, Gender, and Sexuality. I now live in New York where I work for LEDA as their Community Outreach Officer. Recently, I had the amazing opportunity to attend a Summit on Diversity and Inclusion in Higher Education held at the White House! While there, I was on a student panel where we not only talked about our transition challenges in college, but we also gave the people in the room a suggestion on how to make college a better experience for students from backgrounds similar to ours. Here, Iâ€™ll share my thoughts surrounding the event as a whole and how it changed my outlook moving forward.

Much like more than half of the country, I was absolutely devastated when Donald Trump was declared the President-Elect of the United States of America. I experienced the usual stages of grief and had a hard time finding meaning in the work that I was doing. My life so far has been dedicated towards a specific goal – to make this country a little bit more comfortable for marginalized people like me. The election results made me feel as if no progress has been made. Half the country doesnâ€™t care. They donâ€™t care about the work that Iâ€™m doing, and whatâ€™s more painful-they donâ€™t care about me. So when I received the email invitation to the White House the following morning from election night, I burst into confused tears. It took me a few hours to calm myself enough to realize that the Obama administration is still at the White House and even if it was not, itâ€™s more important now than ever to let our voices be heard, even in spaces that donâ€™t welcome them, and even if it makes us uncomfortable. It was decided – I was going to the White House.

The day started with a series of speeches from some very impressive people. Many of the people in the room were college and university Presidents, diversity scholars, leaders in education, student leaders, the Deputy Under Secretary of Education, the Under Secretary of Education, and we even got to hear from the Secretary of Education himself. I was immediately struck with the passion with which everyone spoke. One man in particular, Mr. Ted Shaw wasted no time and addressed the elephant in the room – what a Trump Presidency meant for us and how it impacted him. He moderated a panel that set the legal context as well as emphasized the role of students, faculty, and administration in working together to build diverse and inclusive campuses. The panelists said that moving forward would be difficult, but certainly not impossible. Iâ€™d say that this was the overall takeaway from the day. I was also impressed with everyoneâ€™s candor. No topic felt too taboo to discuss. The resolve in peopleâ€™s words was palpable. As panelists, we were encouraged to be honest in our reflections on our college experience. We spoke about racism, classism, and the challenges of being a first generation college student. Nobody seemed shocked or surprised to hear our stories. To me, that spoke volumes.

Another pleasant surprise for me was how much students were encouraged to share our suggestions on how to make higher education better with the people in the room. Since, as I mentioned, many of the attendees were people with a significant amount of power within education, sharing my suggestions felt intimidating, but they were very well received. There was actually significant stress put on our suggestions as there was resounding recognition that we were experts on our experience. I started feeling an overwhelming positivity from the day that only grew stronger as the experience drew to a close.

Personally, the most significant moments of the day were meeting Dr. Stella Flores and Dr. Michelle Espino. Dr. Flores was a panelist that spoke about statistics and bridging the gap between research and action. Dr. Espino approached me as I wandered the halls, trying to find my next destination. Both women gave me more courage than I can tell. As it turns out, Dr. Flores and I share remarkably similar stories. She grew up in the Rio Grande Valley and spent her undergraduate years at Rice as well. Now, sheâ€™s a leader in the field and I felt incredible pride. We were both so shocked to find each other in so unlikely a place. It felt like fate and we promised each other weâ€™d keep in contact. After this encounter, you can imagine my disbelief when Dr. Espino told me that she is also from a Texas border town and is now a professor at one of the best Higher Education Administration programs in the country. She also gave me her business card and told me that I have her support should I ever need anything. Scholars that are from the Valley (or from any small town, really) know how unlikely these encounters are and how rarely they happen, but they did. And they were exactly what I needed to keep me motivated.

In her closing remarks, the Deputy Under Secretary of Education, Kim Hunter-Reed, gave a heartfelt plea for us to not forget what we learned that day and to keep the connections that were made. She then opened the floor for anyone who would like to add to the conversation, and this started what I think to be the most beautiful part of the day. The gratitude for the work that we are all doing came from every corner. We all thanked each other from the bottom of our hearts. We spoke of our challenges and reassured each other by saying that we have the tools and support to continue our work. We offered each other help and acknowledged that now more than ever, we need to lean on each other as we will likely receive no support from the highest office in the land. We were even described to have bonded together like a family. It had been an emotional day, but also extraordinarily productive.

I want to thank LEDA for giving me the opportunity to attend this event, and I also want to thank President Obama and his administration for giving me hope. Before that day, I was skeptical. I felt hopeless. As I said, I was shocked to see the amount of understanding in the room. These people really do want change, but change doesnâ€™t come easy. It requires patience and persistence-even more so now. But now I know that there are hundreds of people in our corner, willing and ready to do the good work. A summit such as that one will likely not occur at the White House in the next four years, but it can happen outside of it. We just need to stick together and not lose sight of each other. Weâ€™re not alone. I can promise you that.

Revisiting Myself by Ruo Qiu

This summer, I was given the amazing opportunity to return to Princeton University for another LEDA summer â€“ not as a Scholar, but as a College Guidance Assistant for Cohort 12!

My Voice in the Fight for Education Equity by Ashlea Haney

The White House was a space I would be heard.