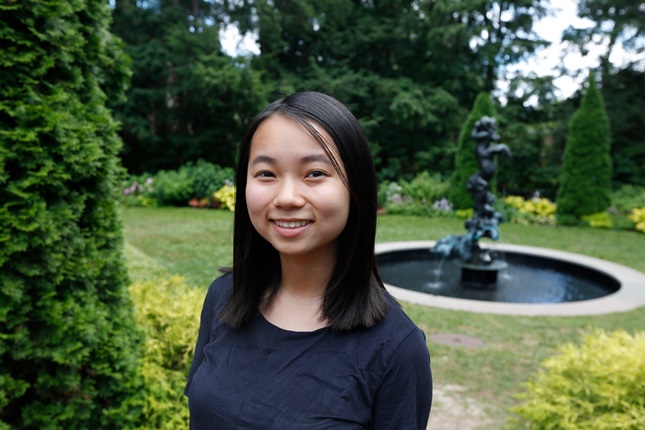 Hi there! My name is Ruo Qiu, and Iâ€™m a Cohort 10 LEDA Scholar from San Luis, Arizona. Iâ€™m currently a sophomore at Occidental College (Oxy for short) in Los Angeles, California. This summer, I was given the amazing opportunity to return to Princeton University for another LEDA summer â€“ not as a Scholar, but as a College Guidance Assistant for Cohort 12! In this post, Iâ€™ll be reflecting on some of my experiences throughout the summer (with hints of reminiscing about my own LEDA summer two years ago.) This single post definitely canâ€™t do justice to all of my newfound precious memories and lessons, but I hope itâ€™s able to provide a neat little summary!

First, I want to provide some context into how I felt before the Summer Institute. In a lot of ways, my first year of college was rough. I had to develop new study habits and learn how to reach out to the resources on campus in order to keep up with the rigor of my classes. Culture shock, even though I thought I had prepared myself for it, managed to seep into my consciousness and affected my social life for a while. I worried about my parents a lot, because I didnâ€™t know who would be there to translate for them or fix technology issues for them while I was away at college. Even though I had my share of personal achievements, like having participated in several extracurricular activities and stepping out of my comfort zone in many ways, I felt that I was, overall, unsatisfied with my first year of college. As the school year came to a close, I knew that I had some self-reflection to do and changes to make.

During training week, the first week, I spent most of my time with the College Guidance team. My first instinct was to be professional, formal, and to present myself as someone who was reliable. After all, I was the youngest person on the team, and I was working my first ever paid job; I wanted to make a good impression. Well, as it turned out, the formalities were dropped fairly quickly when the team (minus Ms. Gellene, Senior Director of College Pathways and my supervisor) headed out to Nassau Street for an ice cream social per the suggestion of Rebecca Amoah, one of the counselors. Our trip included a whole lot of getting to know each other and story sharing about our experiences, as well as the places we came from. Then, through spoonfuls of ice cream we shared our excitement and anxieties for the work that awaited us in the next seven weeks, and somewhere along the way I realized that I didnâ€™t have to present myself in a certain light around these wonderful people. Just as Rebecca was genuinely funny and made me laugh so hard that I almost choked on my ice cream, I could genuinely be myself and still be taken seriously as a part of the College Guidance team. On our way back, I silently made a personal goal to be a support system for all of the College Guidance staff members, and to keep the team morale and positivity as high as it was on that day.

The morning after the Scholarsâ€™ arrival, they gathered into lecture halls and took a standardized test, despite being exhausted, and for some, jetlagged. Every time I think about my own experience taking that first test at LEDA, I shudder. The struggle to not fall asleep while taking the test was too real. As I proctored with sleepy eyes at the front of the lecture hall, I knew that this would only be one of the many times that Iâ€™d empathize with the Scholars throughout the summer. â€œReliving the LEDA experience vicariously through the Cohort 12 scholarsâ€ was not included in the job description, but it was an aspect of my work that Iâ€™d anticipated and looked forward to. Because Iâ€™d gone through LEDA summer myself, I was able to do things like giving pep talks to Scholars after the test in order to remind them that their scores didnâ€™t define them. One of the challenges of the summer was convincing Scholars of that very idea — â€œyou are not your score.â€ Even when I scanned the tests and inputted test scores, I felt no attachment to the numbers. It was the names and the stories behind those names that impressed me. This was something that I would have wanted to tell myself two summers ago, and as a Scholar-staff member, I wanted to make sure that this cohort was well aware of their potential beyond standardized test scores.

They say that if you love your job, work rarely ever feels like work. This saying mirrored my sentiments throughout the Summer Institute. Never mind that Iâ€™m one of those people who actually enjoys administrative tasks — working alongside my partner, Diego, who was the other College Guidance Assistant, made everything twice as enjoyable. If we werenâ€™t jamming out to music as we worked, we were exchanging inside jokes. Still, being able to speak to Scholars about college and my own experiences in college had to have been one of my favorite parts of the job. Each time I talked about a schoolâ€™s core curriculum or the majors they offered or what campus life was like, I did so with enthusiasm in hopes that they would become just as enthusiastic about the school. It was never forced enthusiasm, because I genuinely enjoyed talking about all aspects of college, from the application process to post-graduation. It felt so rewarding when Scholars approached me to tell me that they had added a school to their college list after our one on one meeting, or after doing more research following our meeting. I slowly came to realize the importance of working for a cause that I was passionate about, and I made a mental note that regardless of my future career, I would make sure to love the work that I did.

At several points throughout the summer, I thought about pursuing careers that werenâ€™t on my radar before this summer, all because I enjoyed my work as a College Guidance Assistant so much. During the college trip to Swarthmore College, I remember trying to imagine myself standing in the place of the admissions officer who was presenting, and I wondered if I could deliver the same information with pride for the school as she did. The answer turned out to be yes, as I found out during a small Q&A dinner session for Scholars who were interested in Oxy. I ended up answering as many questions about Oxy as the admissions officer did, and occasionally my answers were more detailed because I had such a wealth of knowledge about my school. I was even praised by Ms. Gellene, which gave me a huge confidence boost. I also thought about working as a counselor for programs similar to LEDA, because I liked the thought of being able to work with and provide guidance to students who came from disadvantaged backgrounds. Working as a College Guidance Assistant opened my eyes to potential future careers that I would’ve never previously thought possible for me.

One of the biggest gifts that I received from LEDA two years ago was the gift of meeting people from all walks of life. The thoughts, ideas, stories, and cultures that were shared between the Scholars of Cohort 10 during my LEDA summer contributed heavily to my personal development, and a part of me had been hoping for the same outcome during my second LEDA summer experience. Instead, what actually happened was that I received so much more from the Cohort 12 Scholars than I expected. As I learned about the Scholars and their backgrounds over the summer, I was dazzled by the resilience and ambition that led them to where they were. Watching them learn and grow throughout the seven weeks of LEDA, I couldn’t help but reflect on my own journey to where I am now, and I allowed myself to feel proud of myself, just like how I felt proud of every Cohort 12 Scholar for taking the steps to accomplish their dreams. Spending time around the Scholars and offering them advice provided me with the self-reflection that I needed after a rough first year. Every time I nagged them about the importance of time management and not procrastinating, I felt like I was giving myself reminders to take my own advice. Whenever I listed out the various resources and support systems available to them in college, I was reminding myself that I should take advantage of those resources more. Ultimately, for me, this was a summer of learning and re-learning who I was as a person and what I needed to do to succeed.

Once again, LEDA summer has been a life-changing, eye-opening experience. Working with the Scholars rekindled my motivation, and their excitement for college was so contagious that I looked forward to starting school again more and more every time we talked about college. Through my fellow Scholar-staff members, I found mentorship and advice on how to power through the rest of my college years, and I also found role models to look up to. After working as a College Guidance Assistant for the summer, I gained valuable technical and interpersonal skills that I look forward to applying in my future jobs. As I head into my second year of college, Iâ€™m certain that Iâ€™ll be able to do my best, whether itâ€™s in my o-chem class, the clubs that Iâ€™m a part of, or meeting new people and networking. If Cohort 12 can survive a year of AP classes, college supplements, and the craziness that is senior year of high school, I can definitely conquer my sophomore year.

I never believed that I would leave the Summer Institute with one hundred kindred spirits to make me feel as if Iâ€™m doing something right.

Recently, I had the amazing opportunity to attend a Summit on Diversity and Inclusion in Higher Education held at the White House!